Young Film Academy are the UK’s leading provider of filmmaking education to ages 5-19 and offer a range of summer school for kids options:

1. Residential Summer Camp (ages 12-13, 14-17)
If you’re looking for a 1,2 or 3 week creative summer camp in the UK, where students can live onsite, then come and make movies with Young Film Academy!

This summer, Young Film Academy (YFA) are transforming a beautiful boarding school one hour from London into a state-of-the-art movie studio for young people aged 12-13, 14-17. Two weeks of non-stop filmmaking fun where students can eat, sleep and breathe movies!

For full details of our UK Residential Summer Camp, click the big red button. To book your place, contact us on 0207 3874341

2. Filmmaking Courses (ages 8-10, 11-13, 14-18)
If you’d prefer a one-day or four-day course (10am-5pm), Young Film Academy run filmmaking courses from 4 venues in London throughout the summer, culminating in a premiere screening of the movies at the prestigious BFI Southbank.
Click here for full COURSE DATES.: 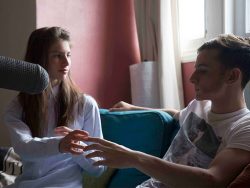 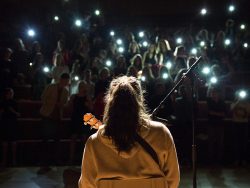 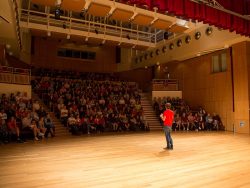 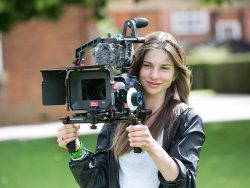 Young people who love films and have a passion for creating or acting in them experience a dream come true as they attend Youngfilm  – Summer School for Kids.  Here you will be immersed in the craft, the art and the magic of making movies.  Ages 12 through 13 or 14 through 17 participate in camps in which they will eat, sleep and breathe filmmaking all day long while having loads of fun.  Each one or two week session of  YFA Summer Camp is held at a premiere UK boarding school, St Catherine’s Bramley near London, and includes all tuition, meals, board, activities, equipment, and  excursions.

MAKE FILMS OR ACT IN THEM

While learning filmmaking and acting techniques from talented professionals in the UK Film Industry, our students use professional filmmaking equipment to create and star in their own short films.  Students on Young Film Academy’s Summer Camp are divided into two crews:

• Filmmaking Crew: on which aspiring filmmakers develop
the hands-on technical and creative skills they
need to make their own movie from its initial creative
concept to the end-of-camp premiere film screening.
•  Acting Crew: on which aspiring actors learn from
professional acting coaches all aspects of acting
performance used in film and TV, developing and then
practising the performance skills necessary to act
with impact.

These two crews combine their work as the Acting Crew members take on the short film roles available in the movies the Filmmaking Crew members produce. Camp culminates in the onsite cinema venue with a Premiere Screening before family, friends and instructors of the students’ completed movies, including some special behind-the-scenes features and blooper reels as well.

After work in class and on the set is done each day there are many great fun outdoor and indoor activities for students to enjoy.  They may participate in sports such as tennis, basketball, swimming, and table tennis. There are movie quizzes, film screenings, various competitions, and talent shows. Students also enjoy dance, drama, games, and special excursions.  When students leave at the end of camp, they will have a digital copy of their completed film to keep.

Movies affect us in ways that seem magical.  To be a part of a team that creates movie magic is rare and special.  Filmmaking is a team-oriented and collaborative effort to which filmmakers and actors bring their own focus and passion.   Over the last decade, YFA’s amazing industry professionals have helped more than 75,000 young filmmakers and actors to complete and screen their first film. We are honoured to provide a way for young people to develop experience both in front of and behind the camera in order to build their skills and their confidence, not to mention their industry portfolio.

At Young Film Academy, we truly believe the passion for skills at which one excels begins early.  Our summer school film academy for students who are passionate about films teaches filmmaking through the hands-on approach of learning by doing. Students will learn all aspects of filmmaking from our professional YFA and UK filmmakers including:

Student filmmakers work with the professional equipment of the filmmaking trade, including a full green screen studio plus Hollywood databases of post-production visual FX and sounds.   Participants then run their own film sets as the Filmmaking Crew works with the Acting Crew to create showcase films.  They may also take acting roles in their own films as needed.  Finally, students receive advice on careers in the filmmaking industry.

LEARN ACTING BY PERFORMING IN FILMS

Students with the enthusiasm and desire to act will learn necessary skills for honing their own natural talent.  From our professional YFA acting coaches, students learn the important skills required for a screen actor including:

Acting Crew students, in addition to their film work, end each week by participating in putting on a live “YFA’s Got Talent” show in the main theatre.  Students receive copies of all the movies in which they have roles, from which to develop their own screen-acting show reel.  Additionally, our young actors receive a Head Shot and CV in addition to information and advice on various acting careers.

WORKING AND ACHIEVING SUCCESS IN TEAMS

Crew members develop their fields’ specialised skills though practical exercises, attending master classes taught by true professionals in the film industry, and participating in workshops. As YFA is passionately committed to learning by doing, the Filmmaking and Acting Crews then must combine their skills in teams that together work to produce a movie.

YFA Summer Camp culminates inside the onsite cinema for a Premiere Screening of all the student produced movies for up to ten invited family members and friends per participant. Students get to experience the thrill of a packed house, appreciative audience, and behind-the- scenes insights into how each movie was made.

Students in both Crews can choose Bonus Activities from a selection of extra topics of interest to aspiring actors and aspiring filmmakers.  These Bonus Activities include composing a soundtrack and recording vocals; movie poster design; stop-motion animation; special FX make-up; and shooting/acting before a green screen in a chroma key studio.

Also available are English language lessons for non-native English students.  There is an additional cost for this service according to a student’s level and age.  All these lessons are taught by accredited teachers.

Monday starts after breakfast with a welcoming assembly.  Monday and Tuesday then have the same schedule.  The mornings are spent in workshops which end at lunchtime. Two hours of Shooting starts the afternoon off and two hours of sports or activities end it before dinnertime. Evenings have an interval of free time and then planned activities that last until 10:00.

The only change on Wednesday is that the morning time is split between Shooting and workshops.   On Thursday students have workshops all morning and an excursion after lunch.  Except for mealtimes, on Friday students work on Post-Production until it is time for afternoon sports and activities.

Students attend their last workshops Saturday morning.  After lunch everyone gathers at the onsite cinema for the Premiere Screenings.  Dinner and evening activities follow to complete the week’s schedule.  Sunday morning is departure time.

In both Filmmaking and Acting, YFA offers three different camp levels to allow students to participate in the programme according to their experience and age.  These levels are:

*Level 3 for FILMMAKING requires the previous completion of a filmmaking course of greater than one day’s duration.  **Level 3 for ACTING requires some previous acting experience.  This year’s dates for each programme level are available online at https://www.youngfilmacademy.co.uk/courses/our-courses.

Young Film Academy is held at one of the UK’s leading boarding schools.  Set on 36 lovely acres of grounds, St. Catherine’s Bramley is only three miles south of Guildford and one hour from London in the beautiful Surrey Hills countryside.  Easy access is provided by Heathrow and Gatwick Airports and the M25 and M3 motorways.  By prior arrangement with additional payment, our staff can meet campers at the nearby UK airports and transport them to the campus.

The school’s extensive facilities include a performing arts centre; dance studio; and two theatres, one of which is the onsite cinema.   Additionally there are sports fields; an indoor fully-equipped sports hall with basketball courts and badminton; and a large indoor heated swimming pool.

The dining hall serves great food for the three daily meals.  It is nuts-free and can accommodate those with food allergies and intolerances.  Internet access and Wi-Fi are available throughout the site.  The school features areas for relaxing and separate common rooms as well.

Our youngfilm — summer school for kids — boasts a high staff to student ratio.  Our prime concern is the well-being and safety of our students at all times.  All staff members are trained in current safeguarding requirements.  Many are trained first-aiders as well.

Students have 24-hour supervision and social staff monitors all the students so any concerns are immediately addressed and swiftly resolved. All our experienced filmmakers as well as our social staff are Enhanced DBS-checked.  We take care of our students as though they are our own children.

Our YFA Summer Camp welcomes British students who live abroad.  We also accept other overseas students, but students should be to level B1at the least if they are not native English speakers, according to the Common European Framework of Languages.   As our camp classes as a recreational course, student visas should not be required.  It should be possible for students to attend on a tourist visitor’s visa.

In addition to the education in filmmaking and screen acting we provide, students learn and practice useful life skills as well.  These include:

Our students accomplish all these things while having loads of fun.

Today’s children will use visual media throughout their lifetimes to entertain, inform, educate, communicate and network plus much more.  Understanding how all these moving visual images are created needs to be part of every student’s education to prepare them for life.  Many young people from age six into adulthood have the desire and willingness to make films, but are hindered by their lack of knowledge and equipment.  The fact is that many students who otherwise find it hard to engage in school frequently thrive when able to express themselves through making films.

Successfully completing a film is all about group effort and teamwork.  This gives young people a sense of pride, achievement and confidence that positively impacts other facets of their lives.  Steven Spielberg completed his first film when he was 12 years old.  There is no reason today’s 19 year olds shouldn’t already have their own showreels, which are the only tried and true stepping stones for entering film and industry related careers.

Young Film Academy, part of the Magma Group linked directly to the UK film industry, is the leading provider in Europe of practical education in filmmaking for young people aged six to 19. An official partner in the British Film Institute (BFI) Film Academy network, we assist more than 7,500 students annually with completing their first film.   YFA operates filmmaking programmes in more than one hundred schools throughout the UK and is the London’s Children’s Film Festival’s film workshop provider.

Founded 16 years ago by filmmakers Ed Boase and James Walker, the YFA currently works in partnerships with the BFI Film Academy, the Barbican Centre, the Tate Gallery, and the BBC.  YFA helps teachers integrate filmmaking into our national curriculum through delivery of our teacher training scheme.  We also run film courses for young people in prison and others who are marginalised.  Our team of dedicated CRB checked facilitators are all filmmakers who currently work in the UK film industry.   To learn more about YFA staff and programmes or to book a course, go online to http://www.youngfilmacademy.com.uk/about-us.    You may also call +44 207 387 4341.